Welcome to MogulMoxie Maven Wednesdays.  Today we have the pleasure of featuring talented actress and producer Tanna Frederick.    Get ready to be inspired!

I like to start our interviews talking about the importance of education, be it formal or informal. The various paths that our MogulMoxie Mavens have taken to becoming successful has been so inspiring. Tell us about your educational background.

Tanna: “I graduated from the University of Iowa as Valedictorian of my Liberal Arts class with honors in both Poly-Sci (International Relations) and Theatre Arts.

I think the best thing in life is to be well rounded. Accidentally falling into being a poly-sci major informed me in so many ways about human behavior. Even the fact that during WWII the international scene was referred to as the ‘world theatre’ is fascinating. Challenging myself with a higher learning curve is frustrating but seems to always improve my work. I didn’t know what I was getting into with producing a virtual reality project and didn’t know how that would necessarily apply to my acting. But it ended up informing my theatre work and making it stronger.”

To be intentional about challenging yourself certainly takes ambition. Tell about us about what “ambition” means to you and the role it’s played in your life.

Tanna:  “Striving to be the best you can be at what you love doing. I’ve tried to do everything in my life according to this idea.”

To be the best that one can be is certainly an award unto itself. Tell us about the Work you are doing in the world.

Tanna:  “I am an actor and by default an producer (lol) of Feral Dog Productions. It’s necessary to be a hyphenate in this day and age in Hollywood to work. I also run a non-profit called Project Save Our Surf. We take fresh-water filters to third-world communities in need and provide educational opportunities up and down the California coast with day camps for underprivileged kids.”

Very interesting!  Tell us about your projects.

Tanna:  “I try to pick projects artistically that either leaves people walking away from the theatre feeling hope and less alone in the world or material that helps spur dialogue politically and emotionally.”

Now that we know more about your Work, tell us about a typical day in your life.

Tanna:  “I wake up early. I have coffee and answer e-mails. I run or surf. I hopefully get to rehearse or film. I might have to do a couple hours of make-up and go to an event on the red carpet. I might go to a business dinner. If not I play with my shiba-inus and do more e-mails and business stuff and snack on good food and go to bed early. Pretty boring. My friends call me Gertie because my life isn’t all that exciting and I go to bed at 9 p.m.”

Sounds like you have created awesome days for yourself.  We’d love to know what motivates you.

Tanna:  “Staying alive, surviving life’s struggles and helping others do the same through my work.”

As you have used your Work to inspired others, have you ever struggled with confidence or courage?

Tanna:  “Every hour. May sound dramatic, but I am dramatic. That’s my job. I try to keep the drama out of my life and only on the stage. I try to work on myself a lot so I’m not a jerk to others.

I’ve had my nose called huge, my teeth called a horse mouth, make-up artists complain about my face to a producer as they’re doing my face right before I go on to film, blah blah blah.

Boundaries in the artistic world are different than other professions and have to get in the personal realm because people are dealing with a camera and my face. Everyone’s going to have an opinion. How I choose to react is up to me. So like I said, I try to work on myself a lot because in the end I want everyone to have an awesome experience at creating art.”

Thanks for sharing your wisdom in such a transparent way. To work on ourselves is one of the most significant gifts we can give the world.   While we are in a state of reflection, tell us about one of the toughest things you have had to do in business and/or your career and what you’ve learned from it.

Tanna:  “Dealing with agents has been hard for me for some reason. I get scared and think I’m not worth representing. I always think I’m a fluke or my talent is b.s.  It just happens.  So to ignore those negative messages is tough.  In almost two decades I still don’t get over that feeling of being ‘not enough’.  I just have learned to push through, assume the position, and keep moving forward.”

When you think about moving forward and building a sustainable business, what has been most helpful to you in increasing and managing your cashflow?

Tanna:  “Having a financial planner. Relegating my weaknesses to others. Being able to say I suck at some stuff and being willing to get better at it and learn from others.

But there is a risk factor involved to being an artist. I don’t know when the money is coming in, how it’s coming in, what it’s going to look like when it does come in, and that’s something I have to learn to at the least live with and when I’m being my higher self enjoy the ebbs and flows (ha).”

Thanks for sharing a very real perspective on money and cash flow for actors.  I believe the more we know about whatever we want to grow, the more we will grow.   Let’s move from money to personality.  What’s your favorite word and why?

Tanna:  “Colosseum.  I don’t know why. I have an affinity for Greek and Roman words. I think they’re sexy.”

As far a cuss words, “It has to be a combination. A slow build to really emphasize I’m mad. So I’d say: Shit…Piss…Fuck.  Just so no one misses my intention.”

The three word combo is pretty funny. lol  When you think about yourself, would you say that you are unusual, strange, weird or pretty normal?

Tanna:  “Unusual, strange, and weird.   Why would anyone normal choose to be an actor?”

When you look over your life, what have you accomplished, created or built that makes you the most proud or brings you the most joy?

Tanna:  “Every project I’ve done has brought me joy. I’m so proud to say that. The road has been a bit*#%, but the trade off has been worthy of the pain because I’ve done what I’ve wanted to.” 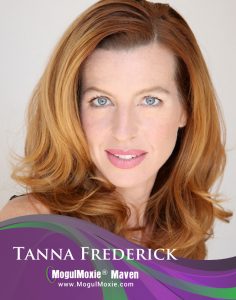 To do what you’ve wanted to do must be very rewarding. What awards/honors have you won that make you the most proud?

Tanna:  “I’m so grateful for the Best Actor awards at festivals I attend.”

I’m also grateful for the LA Women In Theatre Maverick Award and the Method Fest Actor To Watch.  Being the University of Iowa Homecoming Queen makes me proud because I was so not in any sororities and was a big nerd … and I got to walk my dad onto the Carver Hawkeye Arena Football Field.  Being awarded the University of Iowa Alumni Award was also a great honor.

What’s coming up that you want our readers to know about?

Tanna:  “I’m rehearsing John Patrick Shanley’s Danny and the Deep Blue Sea right now being directed by Carl Weathers. I also produced a film that’s close to my heart on my home turf coming out called Garner, Iowa. And my virtual reality series Defrost is going to Cannes and coming out.”

You can keep up with Tanna and her projects all over the Internet and social media.

I hope you have enjoyed this interview with Tanna Frederick  as much as I’ve enjoyed interviewing her! Here are a few golden nuggets of wisdom you can take away from this interview and apply in your own life.

Now that you’ve been inspired by our MogulMoxie®  Maven – it’s your turn. What are you going to do differently in your own life or business? We want to hear about it!

This website uses cookies to improve your experience while you navigate through the website. Out of these, the cookies that are categorized as necessary are stored on your browser as they are essential for the working of basic functionalities of the website. We also use third-party cookies that help us analyze and understand how you use this website. These cookies will be stored in your browser only with your consent. You also have the option to opt-out of these cookies. But opting out of some of these cookies may affect your browsing experience.
Necessary Always Enabled
Necessary cookies are absolutely essential for the website to function properly. This category only includes cookies that ensures basic functionalities and security features of the website. These cookies do not store any personal information.
Non-necessary
Any cookies that may not be particularly necessary for the website to function and is used specifically to collect user personal data via analytics, ads, other embedded contents are termed as non-necessary cookies. It is mandatory to procure user consent prior to running these cookies on your website.
SAVE & ACCEPT